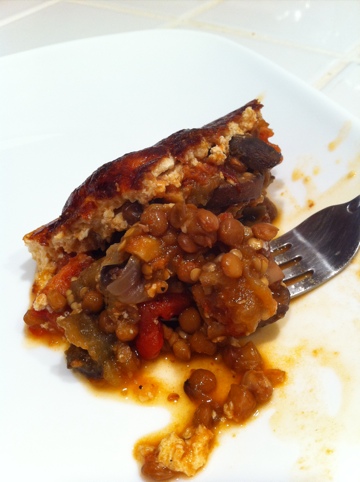 Lately I have become a pretty big fan of Greek food. I love the fresh herbs they use; parsley, cilantro, bay leaves. I also enjoy these frequently featured ingredients: lemon, feta, tomatoes… eggplant. I especially love anything with eggplant! Babaganoush and pita bread? Yes please! And perhaps with some fresh tabbouleh salad on the side. Am I getting hungry? Maybe just a little…

I’ve seen many recipes for traditional Moussaka all over the web, but have always decided it would be too large of an unhealthy dish for me to be making. After all, I’m cooking for only one, and have to eat ALL of whatever I make, lest it go to waste – and waist! (tee-hee). Anyways, Moussaka traditionally features lamb, which is not one of my favorite meats. In fact, I don’t really enjoy meat all that much. Poultry and bacon is about the only thing I enjoy in that food group. But then I found this vegetarian version that also scrapped the usual potatoes. It’s filled with lots of protein and fiber from the lentils and veggies. Not to mention, the sauce has a unique and delicious flavor due to the cinnamon sticks, which simmered in with the mix. I’ve never used this cinnamon technique with a savory dish before, but found it to be delicious.

Sadly on my part, the dish was over-cooked just a bit (I adjusted the time below, accordingly). My cheese topping ended up browning just a wee-bit too much. But no bother, it still tasted quite good! The pictures would be much prettier had I not left the moussaka in the oven for the extra five minutes (and if I had something better than an iPhone camera to work with). The originally recipe called for a 14.5oz can of garbanzo beans, and less lentils, but since I don’t enjoy garbanzos (except when in the form of hummus!) I threw in some extra lentils. You can experiment with another ingredients if you like. The recipe could have used another taste I suppose, but what I ended up with was still much to my satisfaction.

Sprinkle the eggplant slices generously with salt, and place them in a colander in the sink.

Heat a large saucepan over medium heat, and spray with olive oil cooking spray. Cook the onions, letting them sweat out, until softened, about 8-10 minutes. Add the mushrooms and continue to cook until their moisture has been released, about 5 minutes.

Add garlic and cook for another minute or until fragrant. Season vegetables with salt and pepper. Add lentils to pan along with fresh and canned tomatoes, tomato paste, and cinnamon sticks. Bring to a boil, then cover and reduce heat to a simmer. Cook for 20 minutes, until thickened.

Rinse eggplant slices and pat dry with paper towels. While sauce is cooking, set the eggplant slices on a rimmed baking sheet, brush with with olive oil cooking spray, and cook under the broiler for 5-6 minutes per side.)

Whisk together eggs and yogurt until mixed. Season with salt and pepper. Pour yogurt mixture on top of moussaka and top with grated cheese. Bake for 40-45 minutes, until top is lightly browned. 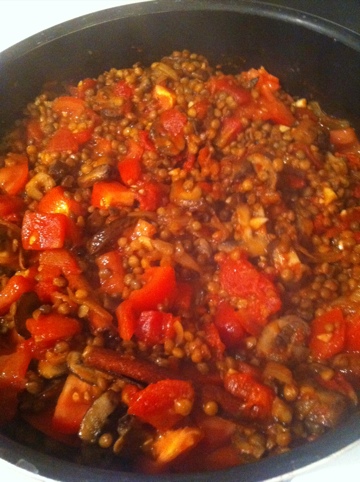